I’ve had a lot to do with boats, one way or another.  For many years my husband and I spent our spare time looking for boats that had been abandoned, or sunk.  No job too mucky.  I wish I could show pictures, but it was before digital cameras.  Believe me, those boats were dirty.  If you value your fingernails, girls, don’t marry a guy who’s into old boats.

Making a silk purse out of a sow’s ear is satisfying.  Once up and running, we used our newly painted boat for a while, and then found that we had enjoyed fixing the beast more than sailing it, so we sold it on and looked for another.  You can waste a lot of money that way.

I particularly remember an old wooden boat called Quest.  She took us through many adventures, the most hairy of which was when we motored her across the channel to France.  Quest behaved well, but the channel did not.  On the way back from a good weekend in Cherbourg we were making excellent progress and had negotiated one shipping lane, when the engine stopped.  Geoff had to go overboard and check it out.   I had to put a rope round him and tie a bowline knot.  It’s the one described as when a rabbit comes out of a hole, goes round the tree, and back down the hole.  Not as simple as it sounds, but I did it that day and lowered Geoff over the side.  If he couldn’t fix the problem we would have to call out the lifeboat!  He dived down, and I waited.  After an hour or so, (it seemed) he tugged on the rope and I hauled him up.

We watched anxiously, aware of the ships and tankers so close by, and then we saw a huge grey sheet rise and move away from the boat.  Thank you, God!  We tried the engine and it spluttered into life, and we were off.  I checked my watch, 15 minutes for the whole thing. 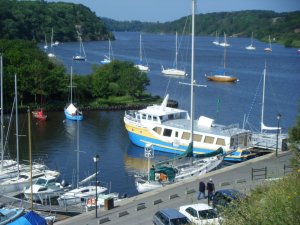 My navigation had to be checked, the tide can take you a long way in fifteen minutes.  A yacht  coming in the other direction gave us a fix, and before too long we were in sight of St. Catherine’s point and celebrating another adventure.

One thought on “A bit about a Boat”